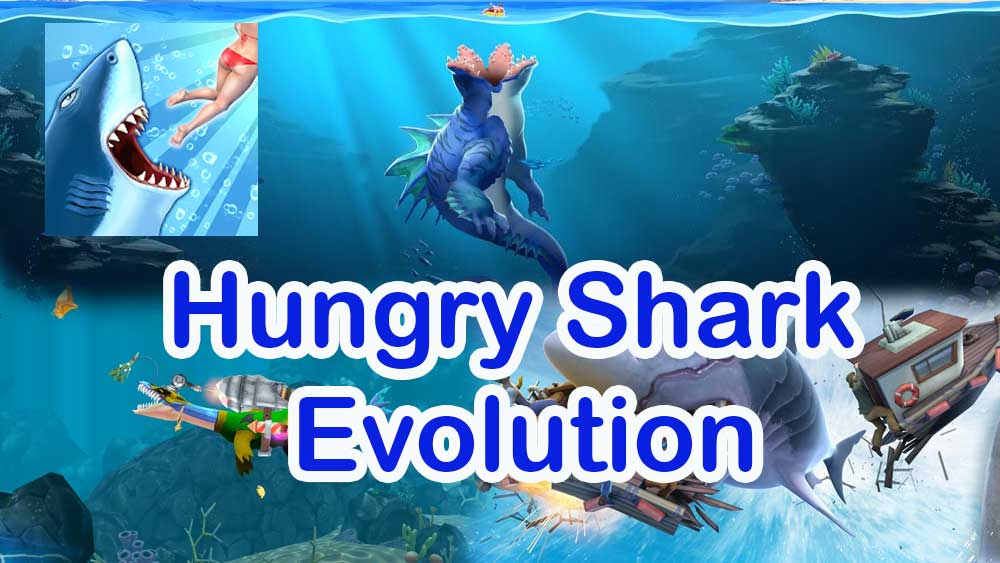 Freedom at its scary best. Survival and action-based games are super thrilling. All the panicky and heart racing feels that we experience while playing this genre of games are indescribable! All that functions throughout this game period are your hands and your motivated driven vision. This is what exactly these types of games are made for, to keep us players or I must say virtual survival gamers hooked onto it.

Hungry Shark Evolution is out there on google play by an outstanding star rating of 4.4. With so many positivity coming in through in the form of feedback from users. The main motive of this game is to make its players play a strong no mercy looking shark that has to eat everything and anything that comes its way. You also get to unlock more than twelve types of unique sharks, other feisty creatures and also you will be able to recruit baby sharks which will help in boosting your predatory powers.

So, guys go ahead and dive right into this aquatic madness and sink into its jaw dropping levels. Being an offline game is another happy note for users who find this game to be one of their favorites.

Open world games like Hungry shark evolution requires more RAM and CPU power for smooth running. Does your device stuck and unable to play this game due to poor performance? You can use game booster applications like Clean Master, AVG cleaner and etc. to close all opened apps and background processors to boost device performance. So, you can use all available resources to run your favorite game at full speed.

The features seem to be never ending in here, the missions given in this game are innumerable. Another cool feature is where you get to advance or evolve into greater sharks like the “Great white” and the “Megalodon”. Also, taking part in often in game places you are able to win limited edition prizes!

You can install this game on your Android TV and Fire TV devices easily with Filelinked or by using Play store which is your default TV app store.

This game can be synchronized very conveniently through all android devices. Hungry Shark Evolution is an in app purchase game, you can purchase by using gem or coin currency but the good news is you can earn them while playing the game and later use them on upgrades which includes activation of gold rush which helps you to survive longer and score much better or awesome accessory purchases like lasers, jet packs and top hats. Another way is by watching advertisements. Advertisements in this game sure do come in handy! But once you have used an ad for purchase purpose it becomes disabled.

It’s a whole fun deal here with this shark play however, due to its minor violent scenes it’s not recommended for smaller kids, but in high demand around teenagers to adults. Over 100,000,000 users have installed the game.

A dreadful looking shark in a game and that shark is you, I love how the developers of Ubisoft Entertainment created and brought this game to LIFE. This is a free game available for Android phones and tablets. Easily download for any Android phone using Play store or by using AC Market.